The project itself is a platform for people to tag areas on a map and create reports. The platform is usually used by NGOs or first responders to manage disaster areas and this resonated with me as I always wanted to contribute to a project that helps people in helping others.

I chanced upon this bug as a pity one while working on another bug for the same project. This issue should've been either my first or second issue instead as the scope was very well defined and they were very clear on what to change to fix the issue. The issue can be found here, simply put the issue is there's a drop down that hides the language selector, but once a user enables the drop down.... there is another drop down to select the language which was redundant. 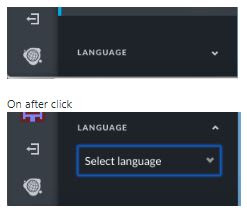 I removed the <span> and the <svg> which contained the first language drop down and the arrow which shows beside it respectively.

AND THAT IS A WRAP FOR HACKTOBERFEST.

This event was extremely nerve wracking, after we finish one issue, we're on the hunt for another that is hopefully not taken by someone. But I'm also thankful as previous to this event and the class (OSD600) in general, I always wanted to contribute to open source, but the massive code bases we had to navigate through as well as the thought of attempting an issue and failing always scared me off.

Did I hit any of my goals? As someone who didn't even understand ways to fix issues posted in the issues tab of projects. Yes. After this event I am much more comfortable with contributing to projects now.

Now if I can get that t-shirt for the event from submitting 4 PRs I would consider this a total success!

Taking a small break from Telescope until the summer semester resumes. I've started collaborating with a elementary school friend on a p...